My brother’s bachelor party was a pretty low key affair, being that it was mostly a LAN party.  I enjoyed it a whole lot more than had it been a traditional bachelor party.

The flight there was uneventful, albeit a little late.  The MARTA ride north had great sunset views. 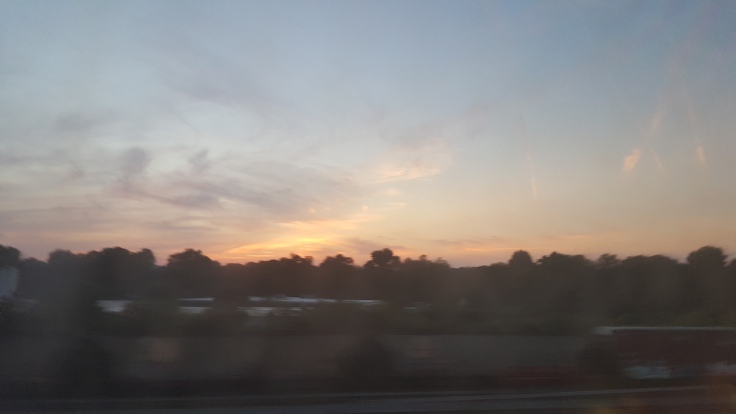 I accidentally missed the station because I was writing an email, but Jeff was nice enough to wait and pick me up when I got back.   I hit the trains just wrong as the one I needed back pulled away as the train I was on pulled up.  It ended up being about a 30 minute delay.  We got to Jeff’s and had dinner with my Mom and Dad.  They brought over some tasty Thai food.

The next morning Jeff’s friends started showing up, and we eventually got to the gun range.  Jeff brought a small arsenal, as did his friends.

I shot a little, but not very much.  I was most impressed by the difference the suppressors made.  The guns with suppressors made a click sound, and the ones without were deafening.

We then headed back for a round of games before heading to Taco Mac.  It was a nice dinner and we met up with the rest of the party there.  We came back to play games, and had a good time of it.  I played a bit of everything, but the FPS’s weren’t my thing.  I did really well in Mario Kart and Rocket League; only losing those to people who play them regularly.

The next day We went to my parents place and hung out.  I played cards with my dad, and Kim came over with my niece Grace.  This was my first meeting with Grace, and she was cute.

We had dinner and watched Game of Thrones, then I grabbed a Lyft for the airport.