I took the week to go to LA for the Creating Reality Hackathon.  It was a lot of fun and I decided to do some prep work around find an idea and a team.  I put up the idea on the Slack channel and a few people showed interest.  It worked out pretty well in that the people who showed interest were competent and good.  The team came together with three engineers, one of which was also great at sound design and music.  We also got a good character artist and a director. 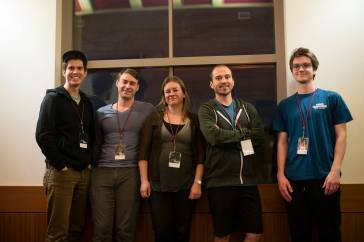 We chose to do the flicksync idea from Ready Player One, which a lot of people at the conference already recognized.  We started with a list of works in the public domain, and that led us to the tea party scene from Alice in Wonderland.  The choice turned out to be better than we could have hoped as it was fun to interact with the silly characters.  The short lines also lended themselves really well to the tech.  We built it out using Watson as the speech to text service.

In the end we won two of the six categories: AI and Entertainment.  We didn’t make the finals because we had an issue with the mic during judging, but I feel that had we made the finals we would have won.

We are going to finish it up and put it on Steam:

And all the details are in our Dev Post on it:

It was a ton of fun and I think it is good for understanding the market and networking to go to these events.