Steph and I decided to do a trip to Europe with Ricardo and Irene, some friends we met through Michael Kehoe.  We talked through a lot of the options and based on deals we found decided to do Barcelona together.

Our original flight Monday morning got cancelled and we got moved to one 8 hours later. We got the info when we woke up on Monday. I got some work in before we had to head to the airport. This was nice and bad, as it meant we lost most of a day in Barcelona, but I got time to put my work in a good position before leaving.

We also had our flight plan changed from a layover in the US to a layover in Madrid, meaning we had an 11 hour flight from SFO to Madrid.  This was preferred by me, and we had a nice seat layout with Steph in the window and myself in the aisle.  I have to say travelling with the switch was amazing.  I played a ton of games, and Steph and I were even able to play some multiplayer on it while on the planes.  This is something I recommend to anyone travelling together.  I will have to get a good set of earbuds to share the audio for next time.

We got to Madrid and made the transfer without issues.  I still find it annoying to have to go through customs, then back through security, but can understand why countries want it that way.  I was surprised by how easy it was to get through the EU customs.  We then got to Barcelona and took a taxi to the hotel, which was a quick.  We had originally planned to do a spa on Tuesday, but that got pushed back due to the delay.  We were still able to do our dinner plans at 7 Portes, where they had good traditional paella.  After dinner we took a walk around the port and then headed into the Gothic Quarter.  We found an alley to grab drinks in and had a relaxing evening absorbing the ambiance of the old city. 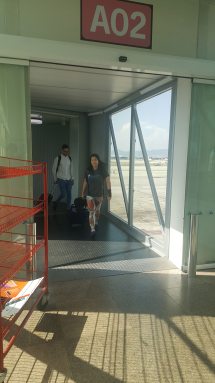 On Wednesday I headed off to the Sagrada Familia after breakfast, with Steph going to Park Guell.  Both are by Gaudi, but they have very different feels.  I really enjoyed the Sagrada Familia and the part that Steph had complained about, long lines, wasn’t an issue with the time slot method with reservations.  I just showed up when my time slot was, and walked right in.  I loved the columns and how they split at odd angles as they made their way to the ceiling.  It was a gorgeous church. 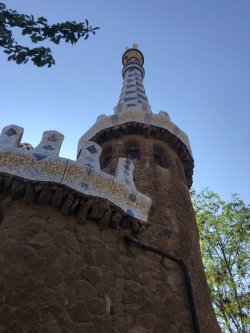 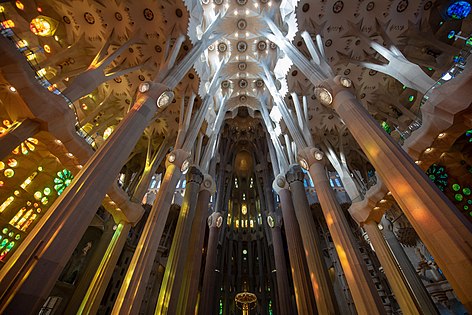 We met back at the hotel and walked a little down the street for a nice lunch at Madeleine Mon Amore.  We walked down to the old city and had the spa treatment we had meant to do on Tuesday.  It was relaxing, with Steph and I spending about an hour in the pools before our massage.  We tried all the pools: hot, warm, bubbly, cold, and salty.  The cold was very cold, as it has ice melting into it.  Getting in gave a shortness of breath, and once returning to the hot pool caused a pleasant tingle all over.  We had our massage in the warm pool, and it was different.  The floating massage we had involved a neck pillow and pool noodle under the knees for floating support.  Then the masseuse would pull and rub different parts of the body.  This worked well for the feet, hands, arms, and head.  It didn’t give them any leverage on the back, making that part of the massage not as good.  I also didn’t like the feeling of my feet and hands being rubbed when they were so pruny. 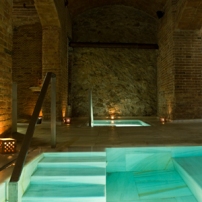 After about 2 hours in the pools I was ready to get out.  I left the others there and headed to a coffee shop to get dry and have a bit more caffeine.  Ricardo joined me shortly thereafter and we had some good conversations.  Both of us had or most traumatic experiences close to home, and were glad we had moved away.  We wandered around the nearby park for a bit before the women joined us.  We walked up to the Cristopher Columbus stature and the Arc de Triumph.  Steph and I then headed back to the Gothic Quarter to wander around a bit more, and we found a vegetarian place on a little square.  The food was decent, and I appreciated the conversation and feeling of being in the old square.  We then wandered the quarter some more before finding a place serving churros and drinking chocolate for dessert, which was amazing. 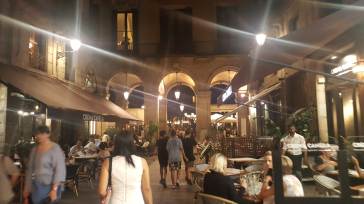 I wasn’t able to sleep that night, which was a bit of a issue as we had scuba diving the next day.  The place was about an hours drive outside of Barcelona on the Costa Brava.  We ended up at the dive shop early enough to have a bit of a breakfast there.  We geared up, which was a little disconcerting.  Steph’s tank was having issues, and by the reactions of the staff that might have been common.  I was also only given a pressure gauge, no depth gauge.  We didn’t cover any profiles before the dive, so I was just trusting that we would be staying in limits, but based on max depth and time we weren’t even close to issues.  I was still uncomfortable with it.  We got to beach Badia de Tossa which was gorgeous.  The castle and beach combo was so picturesque.  The dives went off without too much going wrong.  One of the people who tried to join us had a mask issue and wasn’t able to resolve it.  This was probably for the best as he was super flaily, and then tried to come join us on his own once he had it fixed.  We got to see more than I was expecting in terms of life.  There were a lot of large schools of fish, and dozens of eels.  We were able to see two octopi.  The octopi were about the size of a basketball all together, which is bigger than the octopi I’ve seen before.  I was impressed by the life and variety. 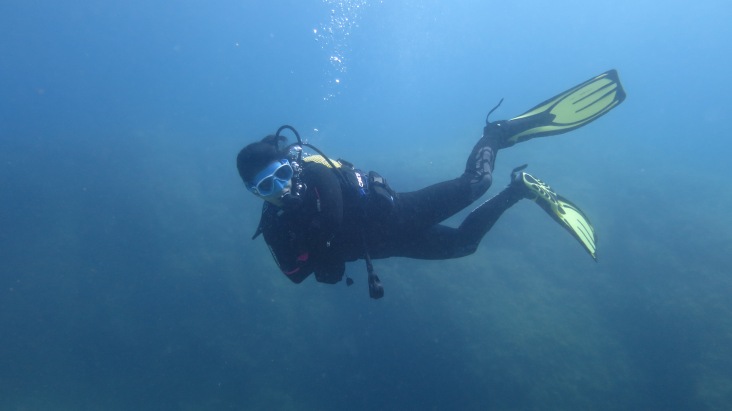 We got back and had a much needed nap, then headed to a nice dinner at Bistro Rastroterra.

Friday we had a tour to see the Spanish wine country.  We got to the tour launching point early and grabbed a coffee before getting bussed to the first winery, Jean Leon.  It was a pretty area, but the ego of the place was a bit much for me.  The next winery, Familia Torres, was a much larger estate with a really well done tour.  I enjoyed it much more.  The third, Friexenet was a sparkling wine that is termed Cava for the region, much like Champagne is for the region in France.  This was by far my favorite as they had an elaborate set of cellars, and the product was in my opinion the best of the grouping. 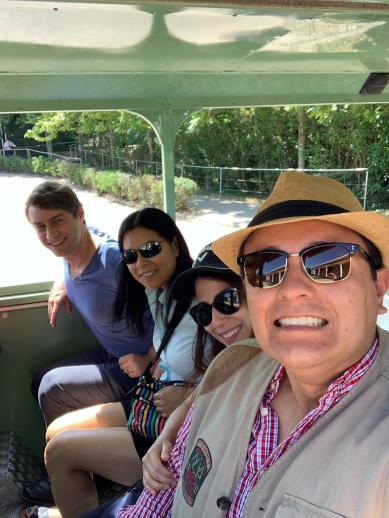 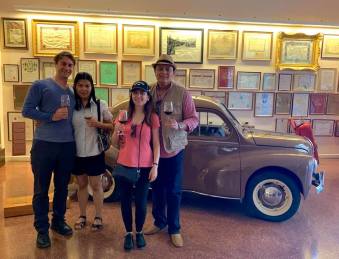 Dinner was at a place in Barcelona called Can Nico and it was the worst meal of the trip.  The food wasn’t seasoned well and overcooked.

Saturday we relaxed fo the morning and then headed to a place near the hotel for lunch.  In comparison dinner the night before Xorus was amazing.  It was probably the best meal of the trip as the food was amazingly well seasoned and perfectly cooked.  We split up after that with Steph and myself going to the Teleferic de Mon Juic.  This was a gondola going up to a castle overlooking Barcelona.  The ride was ok, but the views from the top were certainly worth it.  We ended walking down from there through the Garden de Larybal to the Museu Nacional d’Art de Catalunya.  This was a massive museum that we could have spent all day in.  We got to see some old Romanesque church frescoes as well as modern art, including a Picasso self portrait.

We met back up with Ricardo and Irene for dinner at Hissop.  The tasting menu was amazing, and we had a great conversation about music and games over dinner.  Afterwards we got lucky and found a tea that Steph’s mom had been asking for in the quick mart right outside the restaurant.

I really enjoyed Barcelona.  The city has a great history, great food, and is very walkable and bikable.   The tree lined streets with large pedestrian routes down the medians made it feel much more inviting as a city.  I was especially happy to see that all those routes were very much in use.  I would recommend a visit of a few days here.