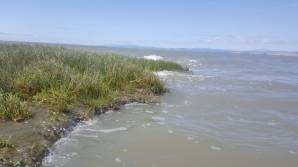 Adam and I set out from the last spot we took out, Palo Alto boat launch, at a little before 1pm.  The path we had plotted ran about 11 miles.  The winds were already pretty strong when we got in and they didn’t let up almost the entire day.  There was a short respite just before we got to the bridges.  At the bridges the winds and waves were turbulent, making it hard to stay straight and not flip as we went through.  We took a few breaks after the bridges, whenever we found shelter from the winds and waves.  Adam was having trouble with his kayak, as it was taking on water slowly.  He ended up bailing twice to deal with it.  I learned that for the next sections I’ll want a skirt for the kayak, as the bay only becomes choppier as we head towards its mouth.  The next paddle won’t be as bad, but the one after that will be a long way as we pass SFO.

We saw some nice wildlife on this round.  The bridges had sparrows nesting in them, and I saw the babies as we passed underneath.  We also got to see a large colony of harbor seals as we rounded the last point.  There were a number of pups still with white colorings among them.  They were on the shore and looked at us like we were crazy, then blorped into the water.