The company did an offsite in Tahoe for a few days and it was a great time.  We left Wednesday afternoon and go to Tahoe just before sunset.  The first thing a few of us did was to go down to the hottub.  We were then split into teams for the weekend, and I was on the Silver team (grey is boring).  That night we went to the casino there, the Montbleu.  I did very well, with +$25 on slots, +$50 on roulette, and +$100 on Blackjack.  I was by far the biggest winner that night.  There was a large group playing craps, and having some fun doing that.  I didn’t join them since I’m not familiar with the way craps works.  We had dinner at a nice steakhouse there, and pretty much everyone got the filet mignon.  The food was delicious, the wine was tasty, and the conversation was excellent. 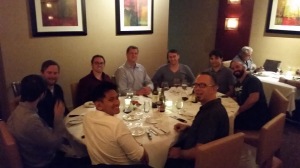 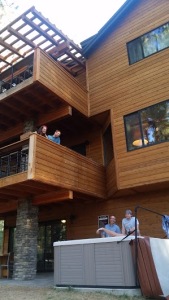 We got back to the house a little later, and played HOTS until very late.  We managed to get a 5v5, as well as a few 4v4’s, and 3v3’s.  The 3v3’s were interesting and fun, since we all went middle lane.

The next day we had a big breakfast and went to the lake.  I brought my dive gear, so I was the only one able to swim for any period of time.  That also made it a lot easier to do the tubing, since when I fell off I wasn’t freezing cold.  We had lunch in Emerald Cove, and I swam over to the island there.  I hiked to the small house on top, then swam around the base of the island looking for crayfish.  I found a few, but only managed to catch one.  I ended up letting the one go since he wasn’t enough for a meal.

We got back and had a big cookout, some board games, and a serious discussion.  For the board games I was part of the group that played Puerto Rico.  I got in a tough spot and lost pretty badly.  I don’t really care for Puerto Rico anymore.  It was fun at first but once we figured out that whoever sits to the left of the person who produces wins, it became a waiting game.

The next day we went up the gondolas and got a great view from the top of the mountain.  I got some alone time at the peak while most everyone else was zip-lining.

Darren and I had a great couple conversations on the way home, and I look forward to future such discussions.