Steph had a fun birthday party that was great, with the theme of Cards Against Humanity.  Everyone showed up as one of the white cards, and there were a few as ‘Bees?’.  Steph was ‘an erection that lasts longer than 4 hours’ and Lindsay was ‘panda sex’.  I was one of the stranger more graphic cards, but the costume was strange, bulky, and uncomfortable.  I changed and had a ton of great food.  I paid for it on Monday with a stomach ache and heartburn.  We played Cards Against Humanity at the end of the party, and it was fun.  Some of the sets were hilarious.  I wasn’t feeling too well, so I just watched. 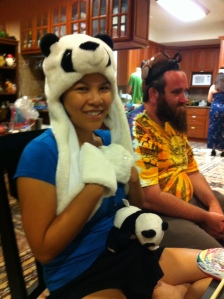 Before the party we were able to re-rack the cider, and some of them were turning out really well.  We figured out that the one we had been touting wasn’t the experimental one, but that one was still in the closet, and full of cloves.  It needed more of the other spice flavors, so we added some more into it.