Sunday in the Dominican.

we left early for the city. At the city we had a great breakfast at a little diner. I got a delicious orange juice and eggs. With breakfast I had mashed plantains which were goos and tasted like mashed potatoes with a little more sweet. The mashed plantain was called Mangu. I didn’t think plantains could be that savory. we then headed to the mall to go to a bank. Steph took out a good bit of money for the both of us. After that we went to a butchers shop to pick up some tasty meat. We then stopped by carlos house and met with his parents and 3 dogs. Amber was so much bigger than I remember. his parents gave us each a mango from their tree which were very sweet and messy. If mangos were always that good I’d get them more often. We stopped by the grocery store and picked up a ton of food and drink. Then we stopped by a place that served ham pulled pork and cheese sandwiches.
We went back to the house and hung out in the pool for a bit. Steph was really tired and couldn’t get to sleep so we switched rooms with Brian and Brittany. We had an underwater swimming competition and I almost got to four lengths of the pool.  We then played a card game called Oh Hell. 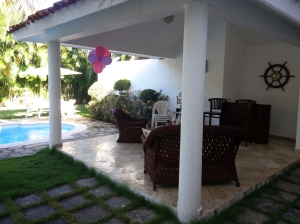 Carlos started making burgers and brittany made some baked potatoes. After dinner everyone was ready to crash so we went to sleep decently early. I slept mostly well but tonight I’m going to have a glass of water ready amd ill leave the ac on all night.